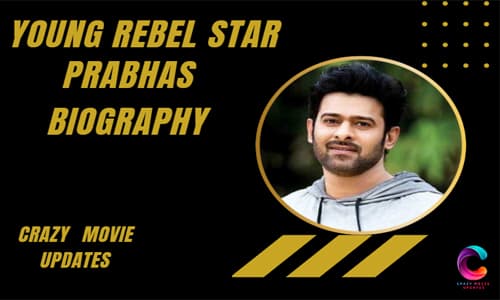 Young Rebel star Prabhas is one of the highest-paid actors in the Indian film industry. His craze reached to next level with the super hit of the Baahubali movie. Prabhas has fans all over India. His journey started with the Telugu film industry and now he is a Pan India star. He featured in the Forbes India celebrity 100 lists since 2015 in terms of popularity and income. Fans are very much excited to celebrate their 42nd birthday. On the occasion of his birthday on the 23 of October let us draw some important events in Prabhas life and  In this article, we discuss Young Rebel Star Prabhas Biography and his lifestyle in short.

Uppalapati Venkata Suryanarayana Prabhas Raju was born to film producer Uppalapati Suryanarayana Raju and Siva Kumari on 23 of October 1979 in Madras, Tamil Nadu. His uncle Krishnam Raju is a former Telugu hero. He has a brother and a sister. Fans like to call Prabhas Darling.

Prabhas made his debut film with Telugu film Eeswar in the year 2002 later he acted in Raghavendra these two films failed at Box office. But his acting got appreciation. In 2004 he acted in the Varsham movie which is a blockbuster on Box Office. In the same year, he acted in Adaviramudu which average hit. In the following year 2005, he acted in a Chatrapathi movie directed by Rajamouli it created a sensational hit at that time. Later his journey continued with Billa, Ek Niranjan, Mirchi, Baahubali, Saaho, etc. Currently, his three movies Radhe Shyam, Salaar, Adipurush are on sets.

These pan India level movies are expected to be released in the year 2022. Prabhas announced another project Sprit, the shooting of this film is not yet started. His move Baahubali directed by S. S. Rajamouli co- starring Rana and Anushka is all time Industry Blockbuster. This film has taken Prabhas craze to all Indian levels. This film created a sensational hit in the whole of India. With this movie, Prabhas become a pan India level star. Fans are very much excited about his upcoming projects. The total Indian film industry is looking forward to his upcoming movies. That is the craze and stardom Prabhas is currently having in India.

After getting success with the Varsham movie Prabhas never looked back even though he had some ups and downs in his career. He acted in above 20 movies among them there are blockbusters, average hits, and even flops too. But love towards him in his fans is always the same. His films Varsham, Chatrapathi, Darling, MR Perfect, Mirchi, Baahubali are blockbuster hits in his career. Baahubali is panned India-level movie. These films created all-time records at Box Office.

Not only this he also received many Awards ETC Bollywood Business, Filmfare south, etc.

Prabhas ranked second as the Most desirable Man in India for the year 2017. He is the most Handsome hero in the Indian film industry. He is one of the highest-paid brand ambassadors. He is a brand ambassador for Gionee India. He also signed for Mahindra & Mahindra. He is endorsing Mahindra TUV300 Cars. There is news that he rejected a Brand Endorsement wort of 150cr by News 18.