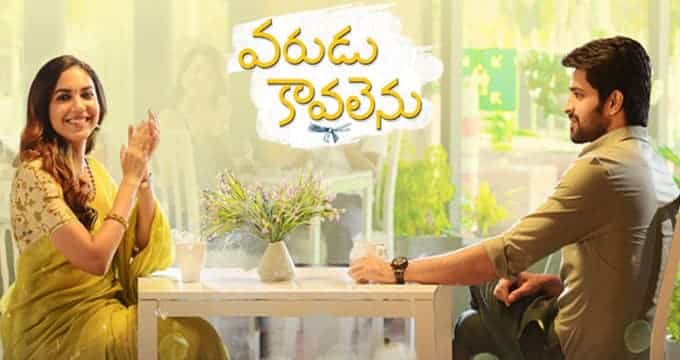 Varudu Kaavalenu is a sensible and mature love story between 30 years old girl and a boy. A kind of mature romance is shown between hero and heroine. This movie is totally different from a regular kind of love drama. Director Lakshmi Sowjanya has given fresh content to the audience. Before going to talk about the Varudu Kaavalenu movie review let us know a bit about the story without having any spoilers.

STORY: Akash (Naga Shaurya) is an Architect and returns to India from foreign. Bhumi (Ritu Varma) is an independent woman. She is not at all interested in marriage kind of things. Akash comes to Bhumi’s company for a project and falls for Bhumi. Bhumi and Akash are previously friends in their college days. He decides to reveal his love for her. When Akash proposes to Bhumi, she straight away rejects him. She had her own reasons for behaving like that. Now the movie is about would Akash is able to get Bhumi’s love. What is the reason for Bhumi’s behavior?  You can get answers to these questions by watching the Varudu Kaavalenu movie.

There are no such big backdrops in the film, but to cover up the lag in the second half director added some comedy scenes which are not that entertaining.

This film was directed by female director Lakshmi Sowjanya. We can see her mark in every scene.  Her way of presenting heroin characters is excellent. She designed Ritu and Shaurya characters superbly. Music by Vishal Chandrashekar and S. S. Thaman songs are added assert for the film. The cinematography work by Vamsi is great, every frame seemed to be rich. Production values are at the top. Another cast in the film like Nadhiya, Jayaprakash, Vennela Kishore justified their roles.

On the whole Varudu Kaavalenu is a great film which should be watched by every movie lover. Excluding some scenes, in the second half, it’s a fantastic movie with good characterization. Naga shaurya and Ritu Varma are the show stealers. Before concluding the Varudu Kaavalenu movie review I personally want to say that, it is a sensible romantic love drama that is to be watched by every movie freak.