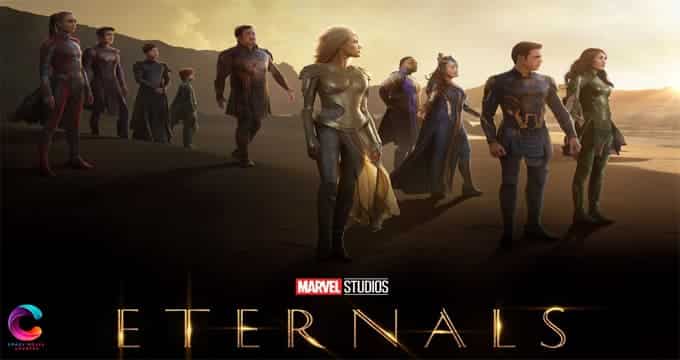 The Eternals Marvel Movie Trailer: We all know the excitement of fans if they came to know that a new movie is going to be released from marvel Studious. Is known as “ETERNALS”. The audience will have a great visual experience. These movies will be filming with great action sequences and with interesting stunts. The Marvel company offers fantastic visual wonders with stories of protecting the Universe and human survival.

Marvel studious made an announcement regarding the release of their new movie from their studious called Marvel Eternals. The Eternals Marvel Movie is going to hit theatres on the 5th of November as a Diwali gift. Recently they released The Eternals Marvel movie trailer. Throughout the trailer, the graphics are packed full of fantastic visual magic.

An interesting discussion is going about the character Thanos and Eternals. The discussion is about how Eternal is going to protect this world and humans from evil spirits? This should be seen on The Eternals movie which is ready to release on the silver screen this November. The Eternals Marvel movie is the third series from Marvel movie studious. As Eternals Marvel movie is releasing in Telugu version there is no doubt that it will bring a visual treat to the audience.

The Eternal Marvel Movie Cast, the film, directed by Choe Zhao, was screened with a budget of $ 200 million. That means as per Our Indian currency is made with around 1400cr. It seems like this movie is almost about 3 hours long.

The Eternals Marvel movie is being released in almost all languages ​​in India. On this occasion, Marvel India launched a massive campaign.  The campaigning is going in Hyderabad, Bangalore, Chennai, including all metro cities, especially in the theatres.

Do you know how much income celebrities Earn on Instagram?