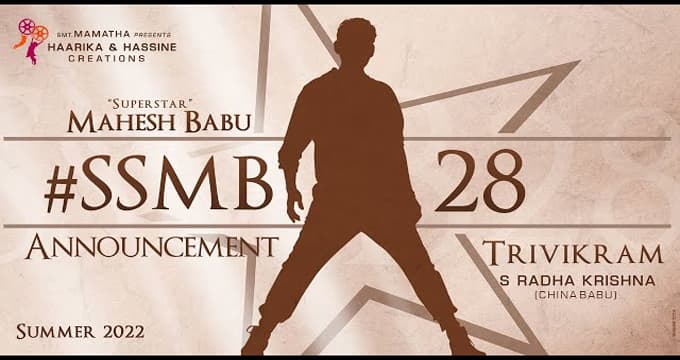 SSMB28 FORMAL LAUNCH: Mahesh Babu new film ssmb28 formal launch is confirmed. The film was made under the combination of Mahesh Babu and director Trivikram Srinivas. It was the 3rd film under their combination. Previously they worked for Superhit and average hit films like Athadu and Kaleja. Recently director Trivikram Srinivas announced the movie under the working title #SSM28. Interesting information about this film is known as the pre-production work has been completed.

Makers are gearing up for the ssmb28 formal launch. It was the 28th film for Mahesh Babu, Shooting will start from February 3 by doing Pooja. It is also learned that the film is expected to start regular shooting from March.

SSMB28 is an action commercial entertainer made on the Pan India level. The film was presented by Smt Mamata under the banner Harika and Hasini Creations. Radhakrishna (Chinababu) will produce this movie with a huge budget. SSMB28 casts top Technicians.

Pooja Hegde will be paring a second time with Mahesh Babu in SSMB28. Previously they both worked for super hit film Maharshi. SS Thaman composes the music. AS Prakash will work as an art director. Naveen will be in charge of editing.

Fans are eagerly waiting for Mahesh Babu – Trivikram Srinivas Combo. They both are working almost after a gap of thirteen years. After this project, Mahesh Babu will work with director Rajamouli.

#HBDVarunTej Power Of Ghani Glimpse out as Birthday Gift