Sri Devi Soda Center Movie OTT Release date is locked. This film was directed by Karuna Kumar, and it was released on 27 of August this year in theatres. Sri Devi Soda Center movie starring Sudheer Babu and Anandhi. Coming to other casts, in this film Naresh, Satyam Rajesh, Sapthagiri, Raghu Babu, and others played some important roles in the film.

Zee Studios company got Sri Devi Soda Center OTT rights. This film is an action love drama. Suribabu and Sri Devi lives in Amalapuram. Suribabu does Electrical works and he is very famous for his work in his own village and in the villages nearby. Sri Devi’s father has a small Soda center business in the same village.

One day they both fell in love with each other. But due to cast differences between them, their families don’t agree with their marriage. Even the villagers don’t support them. Now the story is about how Suribabu overcomes these situations and marries Sri Devi. Does he succeed in marrying Sri Devi? The rest of the story you need to watch in the Cinema. 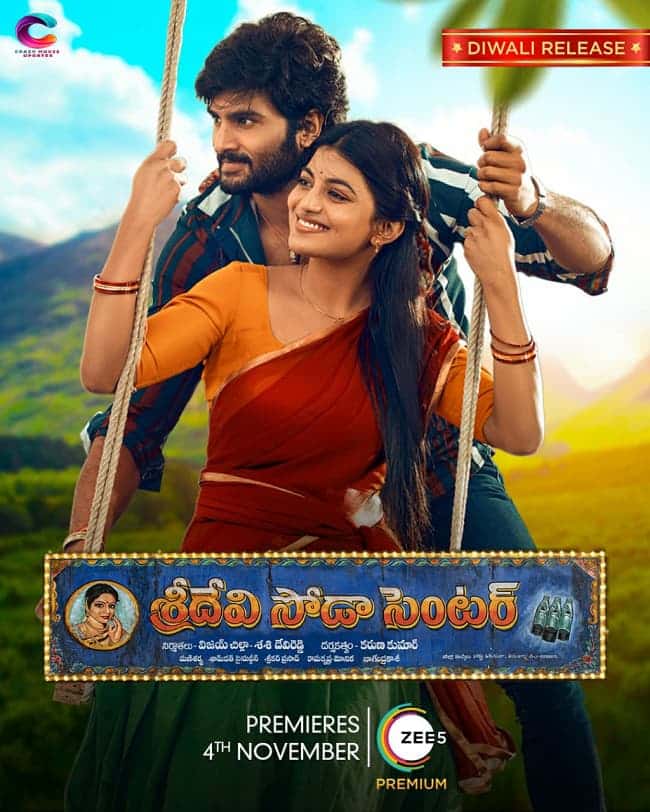 Mani Sharma composed music for this film. Vijay Chilla and Shashi Devireddy produced this film under the 70mm Entertainments banner. Shamdat is the Cinematographer.

This movie discussed a major sensitive issue in society in a soft way. Sri Devi Soda Center movie OTT release date is confirmed on 4 of November by the makers. Zee5 received Sri Devi Soda Company OTT rights. Even though this movie got positive talk it is unable to make a decent collection at the Box Office. This may be due to people being interested to watch this film on OTT.

Sri Devi Soda Center movie OTT release date has been postponed due to many reasons. But now it is all set to stream from this Diwali onwards which is from November 4th in ZEE5.