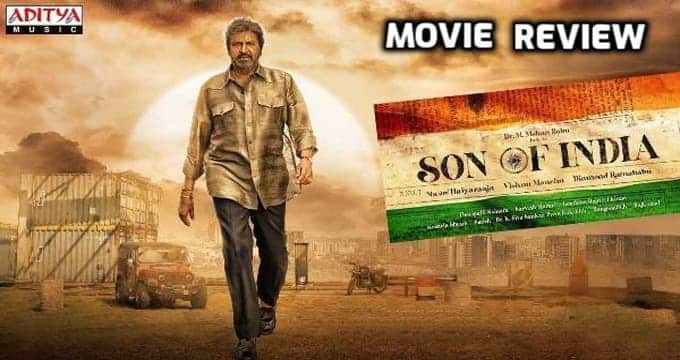 SON OF INDIA REVIEW: After a long gap DR. Mohan Babu shined on sliver screen with Son Of India film. These days Mohan Babu become the care-of address for controversy in the Tollywood industry. Apart from these controversies he had a good fan following for his acting. Son of India release date was announced a couple of weeks back and now the film is streaming in theatres let’s movie on into Son Of India review.

Son Of India Story: Before going into the Son Of India review let us know a bit about its story in short without any spoilers. A well-known Doctor and a central minister including a Government official got Kidnapped.  Who Kidnapped them? How is Mohan Babu related to these kidnaps? What is his flashback? All these things plot the story. With these outlines let us dive into the Son of India Telugu movie review.

TECHNICAL ASPECTS: BGM was good but not that impressive. Editing is done in a proper manner somehow after Mohan Babu’s acting is only the plus point in the film. Director Rathan babu succussed only in portraying Mohan Babu as the hero but failed in all other aspects of the film. There is nothing new with his direction. The film would have been a good suspense drama if the director focused on other things also.

CONCLUSION: Concluding note on the Son of India review is it’s a below-average film. Mohan Babu performance is up to the mark. Other than Mohan Babu’s performance there is no excitement in the film. In other words, we can say that Son of India totally disappointed the audience a lot. Closing remarks are if you are free then you can watch the film with absolutely zero expectations.

Son Of India Review and Rating