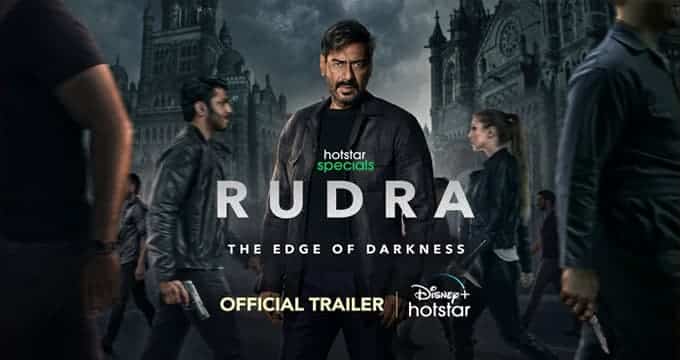 RUDRA THE EDGE OF DARKNESS TRAILER IS OUT: Rudra The edge of darkness is a psychological crime drama directed by Rajesh Mapuskar. It’s a web series that is going to stream on popular OTT platform Disney plus Hot Star. With Rudra web series Bollywood star Ajay Devgan and bubbly beauty, Rashi Khanna is going to make a digital entry. Esha Deol is also playing a key role in the Rudra web series.

As a part of promotional activities, the makers previously released Rudra The edge of darkness posters and glimpse. Recently Rudra trailer is also launched on the internet. Within a few hours of release, many people watched and liked the Rudra trailer.

In the Rudra trailer, we can see Ajay Devgan as an investigative officer, and he successfully completed many cases previously. But this time the case is different, what is that case? How Rashi Khanna and Esha Deol are related to it? Who are the suspects? All these things plot the story. At the end of the Rudra trailer, the makers officially announced the Rudra web series streaming date.

The web series will be available on Disney Plus Hot Star from March 4th onwards. Rudra will be streaming in Telugu, Hindi, Tamil, Kannada, Marathi, Bengali, and Malayalam languages. It was produced by Applause Entertainment and BBC Studios. The audience is very much excited to watch this psychological crime drama.

Rudra The Edge of Darkness Trailer