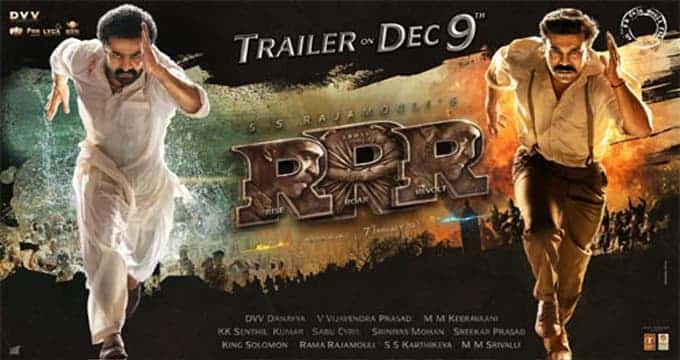 Most awaited movie RRR is all set to release in the month of January. The film was directed by Rajamouli starring Ram Charen and Jr. NTR. RRR movie official trailer release date was postponed. Meanwhile, the makers have announced that it will be released on December 9.

The producers recently announced the RRR movie official trailer release date on their social media accounts. In fact, the trailer is supposed to be released on December 3rd. But it was postponed due to unexpected circumstances. “The #RRRT trailer is all set to release on December 9. The makers tweeted on Saturday “Get ready for the big bang”. The RRR movie official trailer will be released on December 9. The suspense increased with the announcement of the latest date.

The film stars Ram Charan as Alluri Sitaramaraj, a freedom fighter from Andhra Pradesh, and Tarak as Komaram Bheem, a Telangana tribal warrior. This is the reason why both Telugu states are excited about the film. Other superstars like Alia Bhatt, Ajay Devgn, Shriya Sharan, and others in other key roles. MM Keeravani composed the music for the film. The film was produced by DVV Danayya at the pan India level under DVV Entertainments Banners.