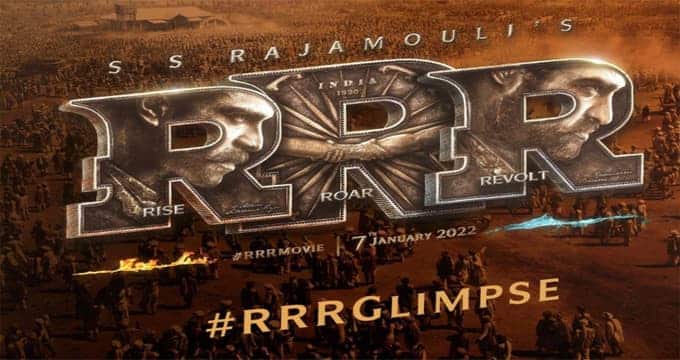 RRR FIRST GLIMPSE: Today i.e., on November 1st Jr. NTR and Ram Charan’s movie RRR first glimpse was released online. This RRR first glimpse was really amazing. This is what fans are expecting from the RRR team. And what I see from RRR first glimpse is it was made in a 1920’s war backdrop full of intense emotions. The audience got goosebumps with these 45 secs of video. Director S. S. Rajamouli said so many things within a 45sec video even without having a single dialog in it.

Rajamouli is no doubt a cinematic genius it was proved with Baahubali film. The whole Indian film focus was shifted on to Tollywood with Baahubali film. Now Jakkanna is getting ready with another masterpiece. In the RRR first glimpse, he said, “Bringing back the glory of Indian cinema, “RRR”. RRR means Raise, Roar, Revolt.

It is also the symbolic representation of the Ram Charan, Rajamouli, Ramarao (NTR) trio. At the end of RRR first glimpse, they announced the movie release date on January 7th, 2022. It means this movie is going to stream in theatres next year. Radhe Shyam is also releasing on 14 January 2022. These two most awaiting movies are released in the same month, within a week’s gap. 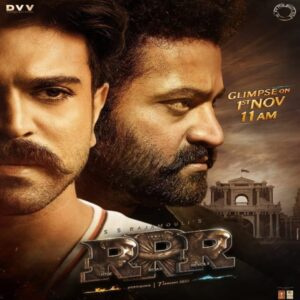 The First Glimpses video went throughout with action scenes. It is understood that R.R.R. will be the Biggest Action Entertainer. RRR shows the struggles of NTR and Ram Charan against the British. The struggles and heights of these two heroes who shed blood for this are impressive. In the previously released NTR first glimpse, we have seen a tiger chasing him, Now in RRR first glimpse, we can see a tiger attacking Britishers.

There may be a connection between these two scenes. Actors like Alia Bhatt, Ajay Devgn, and Ramakrishna can be seen in the RRR First Glimpse video. NTR heroine Olivia Morris just sparkled like that. Overall First Glimpse has given a new feel to the audience.

RRR is based on the life stories of Alluri Sitaramaraj and Komaram Bheem, these two are leaders from Andhra and Telangana at the time of the freedom fight. However, Rajamouli, who took inspiration from those characters and added fiction and screened RRR. This movie has nothing to do with the actual history.

This is already understood by Ram Charan Getups who is playing the role of Alluri. Ram charan appeared in Police Getup in the recently released posters along with the first look video. NTR appeared in a massive and rude look with a muscular body. It clearly says that his character will be more aggressive than expected.

This film was produced by DV Danayya for around 400 crores. MM Keeravani is providing music for the film. Bollywood actor Ajay Devgan plays a key role. This film would be released worldwide on 7th January 2022.