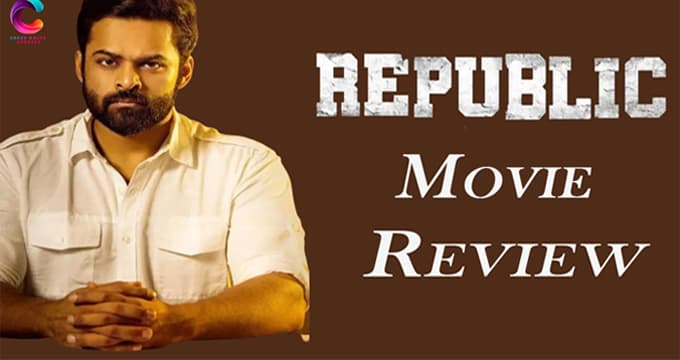 Republic movie hit on the silver screen today that is on Friday. This film featuring Sai Dharam Tej in the lead role as a hero and Aishwarya Rajesh as heroine. Ramya Krishna, Jagapathi Babu are playing important roles in the film. This film was directed by Deve Katta. Republic movie is having an emotional connection with the audience as Sai Dharam Tej recently met with an accident and recovering slowly from it. In this article let us talk about the overview of the film.

Panja Abhiram was a bright student. He wants to change the political system from the inside out. Abhiram becomes an IAS officer as a part of his duty he needs to deal with a corrupted and ruthless politician Ramya Krishna. Ramya Krishna does everything she can to stop Abhiram from doing his work. The story is about how Abhiram handles the situation and faces the challenges? Does he able to achieve his goal or not? 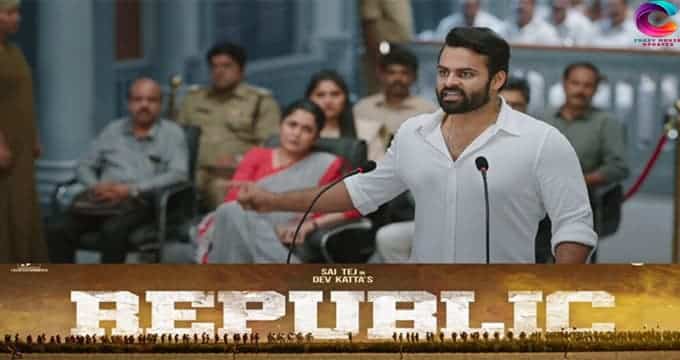 In the film, Sai Dharam Tej’s acting was highly applicable. This is the first time that he is playing a bureaucrat role and he performed it very well. His way of expression and dialog delivery was at the next level. Aishwarya Rajesh supported him in every scene. As usual, the two legendary actors Ramya Krishna and Jagapathi Babu acting is an additional advantage for the movie.

Director Deva Katta handled and presented the sensitive issue of Socio politics in a highly applicable manner. As the film is a political drama Deve did the right thing by not trying to forcefully induce any comedy or any commercial kind of elements. The way of picturing the climax is heart-touching. The background score went perfect with some scenes. The cinematography was at the top.

Lead actors’ performance was a big plus point for the movie

The movie goes on a serious mode

The climax of the movie is a bit dissatisfying

Sai Dharam Tej delivered great acting in his career with this movie. It is a serious political drama. If you are waiting for a fun movie then this is not your type. Overall this is a good movie to watch with family and friends.

After watching the republic movie Nani tweeted that, “watched Republic. This is like a comeback film for director Deve Katta, my heartful congratulations to the whole team. Everyone’s wishes and blessings reflected Sai Dharam Tej with this movie this is like a comeback for him.  Nani also added, Deva Katta previously proved himself with a different political zonal movie called Prasthanam now it’s time for Republic movie. 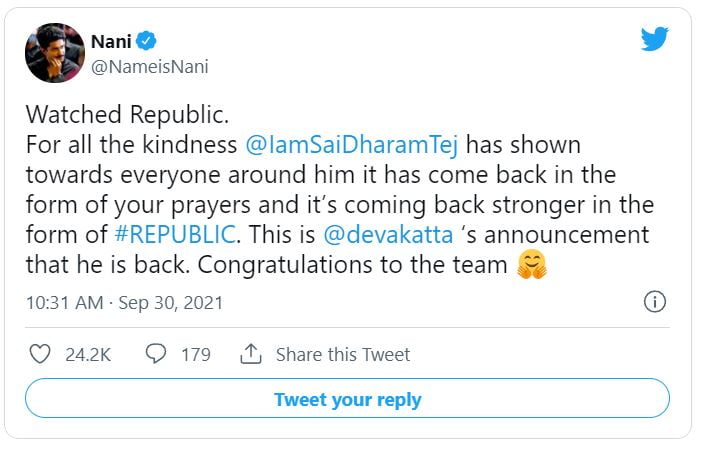