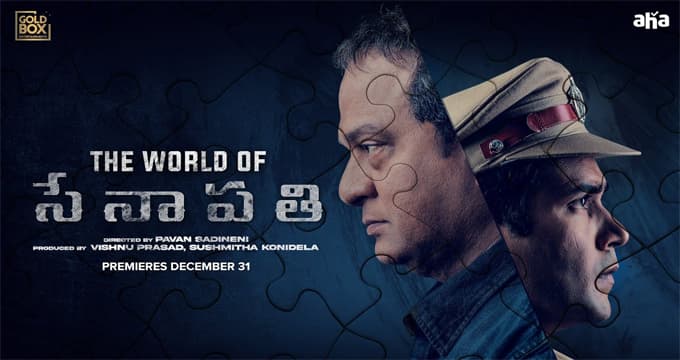 Rajendra Prasad Senapathi: Every time Aha is coming with new content. New web series, shows, movies, and lots more. Aha focuses mostly on web series to attract new customers. The new web film Rajendra Prasad Senapati is getting ready to stream on Aha. The movie will be streaming from the 31st of this month on Aha. Recently Aha released the Senapathi Movie trailer video and it covers the introduction of all the main characters. By watching the Senapathi trailer we can understand that Rajendra Prasad is playing the lead role in the film. Naresh Agastya, Harsha Vardhan, and Rakendumouli are seen in other important roles.

The video tells the gist of the film like a Burra Katha. The Senapathi Movie trailer starts with the voice-over of a person who tells the story of Lord Sri Krishna’s Samanthakamani and the Mani in Dwaparayuga is related to Money in Kaliyuga. Rajendra Prasad’s name in the film is Krishna Murthy He seemed to be a straight-forwarded person and he fights with the Rowdy gang as well as Police also. At the starting of the trailer, they showed a child who has been kidnapped. Most of the trailer involves a fight sequence.

Many characters are introduced in the trailer, but we get detailed clarity about those characters by watching the film. A major part of the story runs on the characters of Rajendra Prasad and Naresh. The words Poyindi Okkate, Poratam okkate, Appanindalu okkate are high lite for the trailer.

At the end of the trailer, Rajendra Prasad points the Queen in the chessboard and says Do you know this, it’s very dangerous. The film was produced by Chiranjeevi’s eldest daughter Sushmita under the Gold Box Entertainments banner. Prema Ishq Kaadhal’ and ‘Savitri’ film director Pawan Sadhineni directed the film. The Rajendra Prasad Senapathi team succussed in creating interest in the film in the audience. Hopefully, this is going to be another hit for Rajendra prasad in his career.