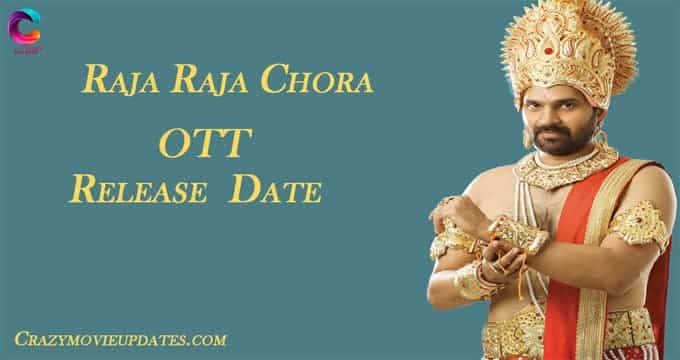 Raja Raja Chora: Movies that were released after Corona’s second wave played in theatres for only two or three weeks. Some movies have not even been in theatres for at least two weeks. Even though movies got positive talk in the audience, movies are unable to make good gross, this is due to corona. That is why almost all the films were also released immediately on OTT.

It is set to be streamed by OTT on October 8, 50 days after its theatrical release. It has been officially announced that the movie will be streaming on the Zee5 app. Zee5 is said to have bought the streaming rights for a hefty sum as it stood out as a good entertainer and recorded good box office receipts at the Raja Raja Chora movie.

Sunaina and Megha Akash are the heroines in this movie which stars Sri Vishnu as the hero. The whole story of this movie revolves around a crown. The hero, who works as a helper in a Xerox shop, tells the heroine that he is an employee in a software company. The hero commits petty thefts. He even hides the matter that he got married.

There will be a lot of suspense around the hero character. It’s interesting how that suspense is revealed at the end. This film was Directed by Hasit Goli, the film has been hailed by analysts as a good entertainer as well as one of the best films of Srivishnu’s career. With such a film set to stream on October 8, which keeps a full stop for the audience waiting.