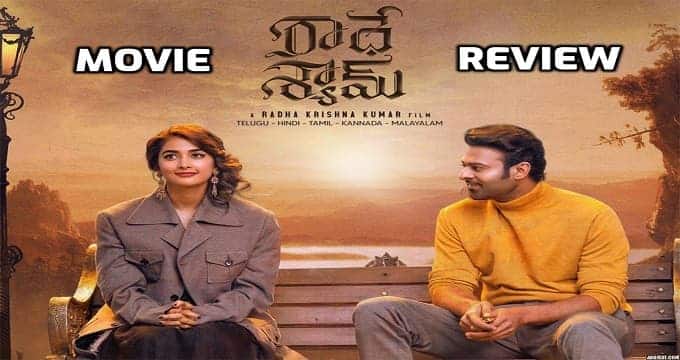 After Radhe shyam movie release date is announced, fans got excited about the film. But at the same time, they were in a worry whether the film was successfully released as per the scheduled time or not. Because the film release date has been postponed many times previously. By breaking all these dilemmas and confusions the most awaiting Romantic drama finally aired into theatres today.  With out any delay let us movie into Radhe shyam Telugu movie review.

Before going into review let us know a bit about Radhe shyam movie story in short without any spoilers. The periodic romance drama sets in Europe, 1976. Our hero Vikram Adithya (Prabhas) is a famous palmist who doesn’t believe in love.  Prerana (pooja Hegde) is a doctor by profession. Vikram Aditya falls in love with Prerana on the very first sight. As Vikarm Adithya can predict the future he moves to London, distancing himself from Prerana. What made him move to London? What has he predicted? Will they both meet each other again? What destiny decided for Vikaram and Prenana? All these things plot the story. With these Radhe shyam movie details let us dive into our review.

TECHNICAL ASPECTS: Talking about technicalities in Radhe Shyam movie review firstly we need to appreciate production designs by Manoj Paramahamsa, he did a stunning job in establishing vintage European background. Every scene created a visual wonder on screen. Director Radha Krishna Kumar chosen a different concept as story which is good. But lack of proper screen play disappoints fans a bit. Outfits of Pooja and Prabhas are like stunning. BGM by S S Thaman elevated many scenes.

CONCLUSION: Closing remarks on Radhe shyam Telugu movie review is it’s a worth watching film. With out any delay book your tickets for Radhe shyam movie right away. Except some minor flaws the film is too good to watch. Especially family audience can connect to movie a lot than mass audience. A small note; before going to watch Radhe shyam full movie is to low your expectations a bit then you will enjoy the film.