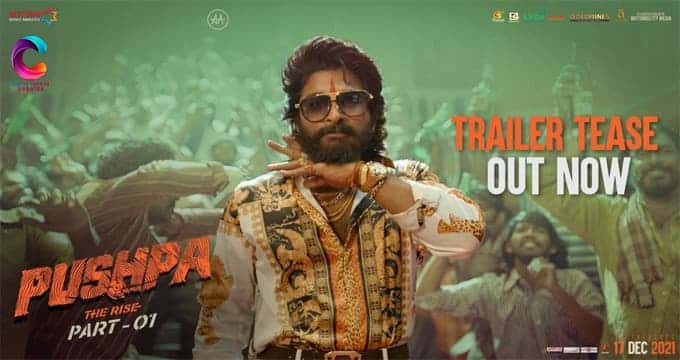 PUSHPA MOVIE TRAILER: Icon Star Allu Arjun and Sukumar’s Pushpa movie trailer was released on the 5th of December, After breaking the internet with teasers and songs, the audience pinned high expectations on the trailer. Let’s see whether they reached their expectations or not

idhi Bhoomi paina dorike bangaram, ERRA CHANDANAM”. We can see Allu Arjun as a local goon who snuggles red sandal seshachalam forest and his Love life. This makes the story is very different from any other Telugu movie. Icon star Allu Arjun lived in the role of Pushpa Raj. His “Thaggede le” dialog is just perfect. Allu Arjun paired up with Rashmika mandanna. Rashmika made a fuss as Srivalli, a village girl, and the chemistry between Rashmika and Allu Arjun is too good. Sunil, Anasuya Bhardwaj, Ajay Ghosh, Dhanunjaya along with Rao Ramesh, Ajay took part in the Pushpa movie trailer.

The action part was cut so fast, but it looks promising. Cinematography by Miroslaw Kuba Brożek is stunning and music by DSP is top knoch. The trailer has elements that the audience expected from this flick, It’s raw and rustic yet entertaining. Producers mythri have spent huge on the film.

The quality of the film is just stunning. “Pushpa ante flower anukuntivemo Fireuuu” is definitely a whistle-worthy moment for fans. Karthika Srinivas, Ruben does the editing work. On the whole Pushpa, the movie trailer lets us down by a bit and didn’t reach expectations. And this is not We expect from a highly anticipated combo. Hope the movie doesn’t disappoint us as a trailer.

According to the trailer, the movie will be out on 17th December. Fans were looking up to the movie as the stylish star is going to make his comeback after 2 years. Pushpa: The rise is the first part of the movie which follows with a sequel next year. This id first pan India level movie for Allu Arjun and Sukumar. The film will be released in Tamil, Malayalam, Kannada, and Hindi along with Telugu.