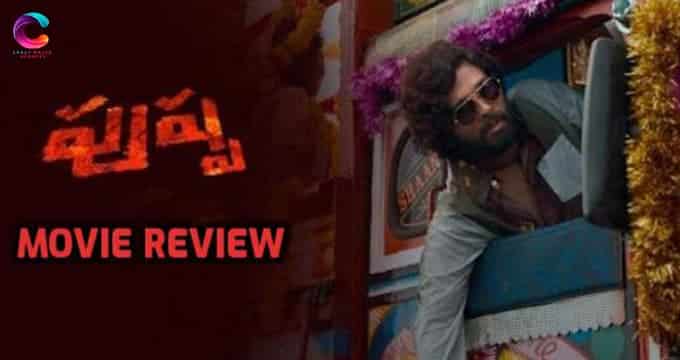 PUSHPA MOVIE REVIEW: Icon star Allu Arjun’s new movie Puspha created a buzz among the audience with its posters and songs. Fans’ expectations of the film are too high after watching the teaser. Samantha’s special song, ‘Taggeede le’ dialog, Sukumar craze, and Allu Arjun mass look has taken these expectations to Sky. Between all these expectations and hype Pushpa, The Raise movie aired into theatres today. Without any delay let us move into the Pushpa Telugu movie review without any spoilers.

Before going into the Pushpa movie review let us know a bit about its story. Pushpa Raj (Allu Arjun) works as a daily wager in seshachalam forests smuggling sandalwoods. He is a man of big dreams and wants to conquer all by himself. He helps the Kondareddy brothers (Ajay Ghosh and co) to smuggle at a point and gains their trust. He seeks partnership from them and later comes to know that Mangalam Seenu (Sunil) is the head of the syndicate. After some dramatic situations, Pushpa Raj opposes Mangalam Seenu and declares himself as syndicate head.

In the meanwhile, Pushpa Raj falls in love with Srivalli (Rashmika Mandanna). When things are going well and there is no one to stop him, then comes Bhanwar Singh Shekhawat (Fahad Fazil). What happens after the entry of Shekhawat? Did Puspha Raj marry Srivalli? You will get answers to all these questions by watching Pushpa full movie. Now without any delay let us move on into in detailed Pushpa Movie review.

Sukumar as a director failed to reach fans and audience expectations. This is not what fans and audiences expected from the film. DSP songs are good, but BGM failed to impress. Cinematography by Kuba adds fragrance to the film. If editor Karthik Srinivas had reduced the slow scenes in the film. It would have been a great plus for the film.

Pushpa Movie review: Few Tollywood heroes want to expand their market to other territories and are doing PAN India films, Pushpa is one among them. Pushpa raj, who came up with different shades in the high voltage giving fans a good feel. The concluding note on Pushpa movie review is it’s one time worth watching the film. If you are an Allu Arjun fan then Grab your Pushpa movie ticket and enjoy Pushpa full movie on the big screen.