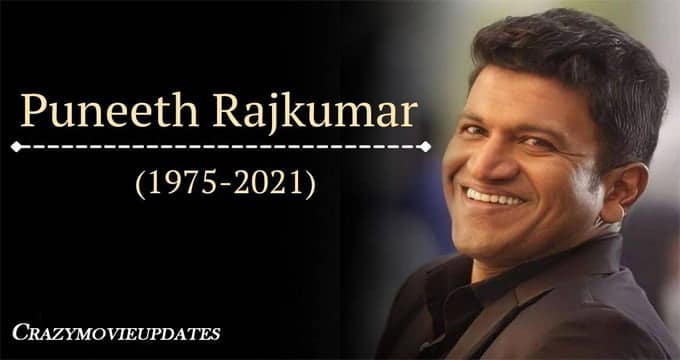 It’s sad news for the South film industry, especially for the Kannada audience. The sudden demise of legendary actor Puneeth Rajkumar took the South audience into a big shock. Puneeth Rajkumar is popular as Appu. He is not only an actor but also a playback singer and producer. He is also a great PHILANTHROPIST. He is providing free education for more than 2000 students in twenty schools. He is running sixteen old age homes and 26 Orphanages. He also maintains 19 Goshalas.  Today he passed away due to Cardiac Arrest at the age of 46.

He is also the host of the Popular show’ Kaun Banega karodpathi’ in Kannada. He is also a great spiritual person. He almost banned the show Kaun Banega Karodpathi in Kannada when he was forced to ask anti- Hindu questions. He has always been a great support to Hindu Dharma and culture. He was born on 7th March 1975 in Chennai. Power Star Puneeth Rajkumar sudden demise is a big loss in the South industry. He is the son of former Kannada actor Rajkumar and Parvathamma Rajkumar. He got married to Ashwini Revanth in the year 1999. They had two children.

Power Star Puneeth Rajkumar did his first film Premada Kanika at the age of six months which was directed by V. Somashekar. In this film his father, Rajkumar is a hero. In the year 2002 Puneeth Rajkumar made his first debut film Appu as a hero. With this film, he becomes famous with the name Appu. After that, he made so many super hit films. He is about to shoot for his latest film Dvita. Appu has seen lastly on screen in the film ‘Yuvarathnaa’ which is directed by Santhosh Ananddram.

Power Star Puneeth Rajkumar ‘Raajakumara’ film directed by Santhosh Ananddram created all-time record at Kannada Box Office. Later it was broken by K. G. F chapter1. This actor received many awards as Best hero as well as a Child artist. He got awards for his singing also. Today morning he tweeted all the best for Bajrangi 2 film. Kannada CM and so many people from all over the Indian film industry have shown their sorrow about Puneeth Rajkumar’s sudden demise. With tear full eyes and broken hearts, fans are telling Alvida to their favorite actor.