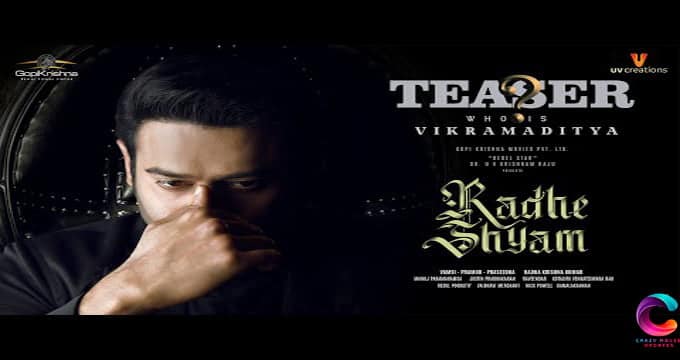 Prabhas Radhe Shyam Teaser: Pan India star Prabhas is celebrating his birthday today. This day is like a festival to his fans. There are a lot of celebrations going on on social media. To double their happiness, updates are coming for his upcoming movies.  The teaser of the vintage romantic drama ‘Prabhas Radhe Shyam teaser was released a few hours ago. Fans have been eagerly waiting for his teaser. Their waiting came to an end. The makers of the movie released the teaser on the occasion of Darling Prabhas’s birthday.

Radha Krishna Kumar is directing the Radhe Shayam film. In the film, Prabhas plays the role of Vikram Adithya and Pooja Hegde playing Prerna. Till now some promotional films have come out along with ‘Bits of and ‘Glimpses of Radhe Shyam. The latest Prabhas Radhe Shyam teaser, reveals who Vikramaditya is. Although it is a Pan India movie, the teaser was only in one language.

In the first glimpse, it looked like a romantic love story. But teaser is a whole different genre. And from what I see, the European aesthetic gave the exact vibe that was needed for the film. Prabhas will be seen as a ‘Palmist’ named Vikramaditya who can predict the future. If you watch this video, you will understand that the film is a visual wonder in the Italian backdrop of the ’70s.

Prabhas showed variation in both dialog delivery and body language. His brand-new looks were stunning. The background score provided by Justin Prabhakar was an added attraction. Manoj Paramahamsa Cinematography and Kamal Kannan Visual effects are awesome. In a short, we can say that the Radhye Shyam teaser is hunger satisfactory for darling fans.

The much-anticipated film will be released on January 14 as a 2022 Sankranti gift. ‘Radhe Shyam’ will be released in Telugu, Tamil, Malayalam, Kannada, Hindi, Chinese, Japanese, and other languages.