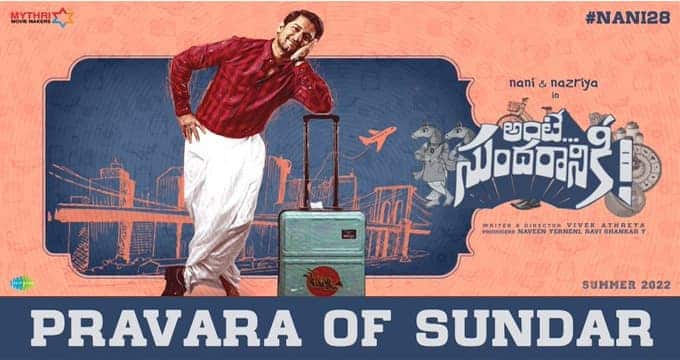 ZEROTH LOOK OF ANTE SUNDARANIKI RELEASED: Natural star Nani is gearing up with back-to-back new films. Currently, he is enjoying the success of Shyam Singha Roy. This film is like one of the biggest super hit films in Nani’s career. The film Shyam Singha Roy is currently running in theatres towards its second week. Nani as Shyam Singha Roy entertained the audience a lot.

This year it’s time for Sundar who is a great devotion for Lord Hanuman. Fans are full on happy to see Nani as K. P. V. S. S. P. R Sundara Prasad. The new film was titled Ante Sundaraniki, and this film is going to be Nani 28th Movie, #Nani28 is trending on Twitter, Yesterday Zeroth look of Ante Sundaraniki was released on the internet.

After watching Nani’s Zeroth look from Ante Sundaraniki we can say that this film is going to be one of the greatest films in Nani’s career. “Zeroth look of Ante Sundaraniki” is a 48-second video. In the video, we can only listen to Nani’s voice and the poster at the end of the video was interesting.

This time also Nani is coming with a concept to entertain his fans and audience. The film is expected to release this summer. Within 24 hours Zeroth look of Ante Sundaraniki become viral on the internet. The film is expected to release this summer. It was written and directed by Vivek Athreya, and it was being produced under the Mythri Movie Maker banner by Y. Ravi Shankar. Nazriya Fahadh paring as heroine with Nani in the film. Vivek Sagar is the music director of Ante Sundaraniki. Cinematography and editing work is being performed by Niketh Bommi and Ravi Teja Girijala.

The zeroth look of Ante Sundaranike was released under the name Pravara of Sundar. The trailer becomes viral on the internet and trending on social media with the hashtag #Zerothlookofsundar.

RRR Release Postponed Again Due To Rising Of Omicron Cases