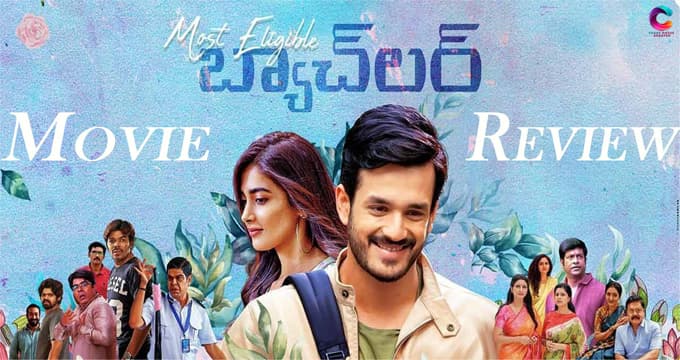 Before going into Most Eligible Bachelor movie review, let us know a bit about the story. Our hero Harsha (Akhil) is a Software employee in the US. He is well settled. He takes a short leave from his job and comes to India in search of a Bride. Harsha’s parents arrange many proposals for him. But he falls for Vibha (Pooja Hegde). Vibha is a practical-minded girl and does stand-up comedy.

Harsha has a traditional mindset and Vibha is a progressive-minded girl. Harsha faces some issues with Vibha’s father. The story takes a U-turn in the second half. The real story starts where Harsha realizes his mistake and tries again to impress Vibha. Now the Story is about, what are the issues that he had with Vibha’s father? How he impresses Vibha again? You will get answers to these questions in theatre. Without any late let us go into the Most Eligible Bachelor movie review.

Coming to the performance of Akhil Akkineni, he is perfect for the role of Harsha. His Character goes through different emotions in the movie, and he nailed it throughout the film. As usual, he looked very Handsome. Pooja Hegde performed equally with Akhil. Her character has a lot of scopes to perform, and she did it really well. It might be one of the best performances in her career. The chemistry between them is pretty good.

Vennela Kishore and Sudigali Sudheer Comedy went well in the film audience enjoyed it a lot. Songs in the film already got a hit talk. The background score elevated the scenes. Marthand K. Venkatesh’s editing has added a point to this film. Somehow, director Bommarillu Bhasker successes in present his point in front of an audience.

It seemed like some logic is missing in the second half when Harsha again tries to impress Vibha. Harsha hides and impresses Vibha buy she is totally unaware that he is the hero. These scenes seemed somehow, illogical.

The narration in the second half is a bit lag. Director has the scope of elevating the storyline, but he didn’t use it. The family drama in the film might have been presented in a better way.

This is a direct Telugu film after 7years for director Bommarillu Bhasker after Ongolu Githa. He always shows interest in giving new content to the audience. He previously made classic films like Bommarillu, Parugu, Ongolu Githa, etc. He received good results with the Most Eligible Bachelor film. The dialogues and songs impressed youth. The cinematography was done by pradeesh Varma. Martha K. Venkatesh is the editor, and he did an excellent job on this film. Gopi Sundar’s music mesmerized the audience. This film was produced by Bunny Vas and Vasu Sharma under the GA2 Pictures banner.

Most Eligible Bachelor is a romantic fun Love drama. Akhil and Bommarillu Bhasker’s combination went well. The Chemistry between Akhil and Pooja impressed the audience. The story is simple and bit illogical. Before concluding Most Eligible Bachelor movie review, my opinion is it’s a one-time watchable movie. It’s a good movie to watch this weekend with friends.