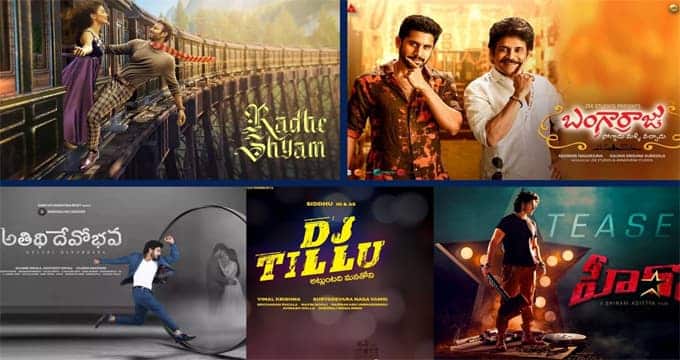 Due to the increase in Corona and Omicron cases in our country movies that are ready to release this Sankranthi are changing their release dates. While Pan India films like ‘RRR‘ and ‘Radhe Shyam‘ were planned for the festival season now there is only one film left but the release of Radhe Shyam is also a big doubt. Most of the theatres in India are running with fifty percent of audience occupancy.

In some places like Delhi, the theatres are completely closed. Both the Telugu states Andhra Pradesh and Telangana are also thinking to impose restrictions on cinema halls because of increasing new cases day by day. In addition to this reducing the prices of Cinema, tickets are also affecting Telugu movies. In this scenario, most of the films are postponing their release date as like RRR.

The pan India film starring Ram Charen and JR. NTR directed by S. S. Raja Mouli which has to be released as a Pongal gift has been postponed to the month April 2022 because of all these issues. Some regional films are announcing their release dates to cash this situation. Currently, films like ‘Radhe Shyam‘ directed by Radhakrishna Kumar, starring Prabhas and Pooja Hegde produced under UV Creations, Gopi Krishna Movies, T- Series with a huge budget will be released on January 14th.

However, despite the news that there is a possibility of a postponing the film due to covid situations. Clarity needs to come on this. As of now, restrictions are imposed on theatres in states like Maharashtra, Tamil Nadu, Kerala, and Delhi. ‘Radhe Shyam’ has made it clear that he does not intend to take any back step.

‘Bangarraju’ starring Nagarjuna, and Naga Chaitanya produced by Annapurna Studios Pvt Ltd under the banner of Zee Studios is in the Sankranthi race. The film was directed by Kalyan Krishna the film was the sequel to the super hit film ‘Soggade Chinninayana’. The shooting of the film was completed and ready to release. Recently Bangarraju Teaser received a huge response.

The makers have officially announced that the movie ‘DJ Tillu’ made under the banner of Sithara Entertainments is also in the Sankranthi race. Next comes the movie “Hero” the film starring Mahesh Babu’s nephew Ashok Galla as a hero. The movie was made under the banner of Amar Raja Media and Entertainment it will be released on January 15th.  Athidi Devo bhava is also in the Sankranthi race starring Aadhi and Nuveksha, this film is going to release on January 7th, MS Raju’s son Sumanth Aswin 7 Days 6 Nights Movie also Planning to release In Sankranthi season and FInally Tamil superstar Ajith valimai is also coming in this Sankranthi on 13th January,