Mahesh Babu 46th Birthday – Tollywood Superstar Mahesh babu Turning 46 on Aug 9th, 2021, on this occasion Superstar fans are going mad and crazy for their Hero Birthday celebrations, But Mahesh babu is planning to celebrate his birthday on the sets of Sarkaru Vaari Paata in shoot location along with his family members and with his Movie team as a part of which they all have reached Goa for their upcoming schedule. As Mahesh’s Birthday special the movie unit is coming up with a short teaser to surprise all of his fans which is going to release on Aug 9th at 9:09 A.M.

The sarkaaru varri paata movie team has planned to give a special treat on behalf of Mahesh’s Birthday. Already the film SVP has confirmed its release date on Sankranthi on January 13th.  Director parasuram has started movie promotion in a different style day by day he is creating a curiosity towards sarkaaru vaari paata movie by releasing Mahesh posters. Mahesh babu fans are started their celebrations on Twitter SSMB Space,

Recently First look of Mahesh’s Sarkaru Vaari Paata got released as First Notice on July 30th which went viral on social media. It sets a new record as highest liked and most Retweeted post on Twitter, Within 24 hours it got 100k likes and 49.1k retweets. and now on his birthday, the movie team is coming up with a new teaser, and also his next projects with Directors Trivikram, and Rajamouli is going to be announced. 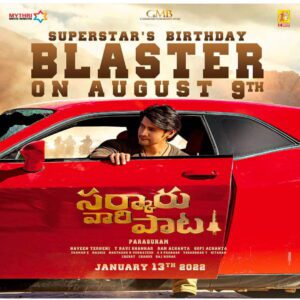 Mahesh Babu 46th Birthday Celebration| SSMB Birthday BlasterMahesh Babu has requested his fans not to celebrate his birthday as we are in a covid crisis, instead, he requested them to plant 3 saplings each and tag him on Twitter which makes him happy to see his fans are participating in GreenIndiaChallenge.