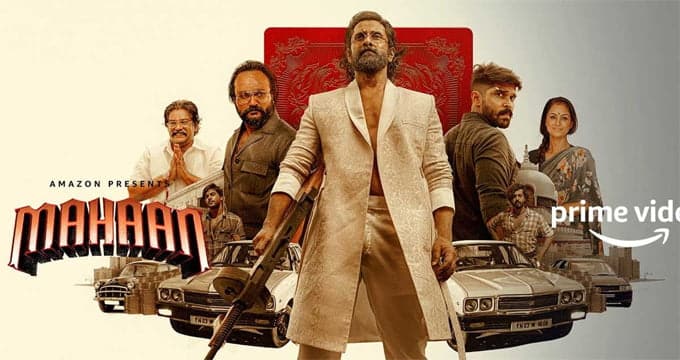 Mahaan Trailer Is Streaming Now: Mahaan movie was directed by Karthik Subbaraj. The film starring versatile actor Vikram in the lead role. Tamil hero Vikram has a good fan following in Telugu also. He is popular for his movies Aparichithudu, Malanna and etc among the Telugu audiences. Now he is coming with his son Dhruv Vikram for the action thriller movie ‘Mahaan’. The audience is excited to see the father and son duo on screens. Due to a pandemic situation, the film skipped theatre release and it is directly releasing on Amazon Prime OTT platform like Surya’s super hit film Jai Bhim.

As a part of promotional activities, the makers recently unveiled the Mahaan trailer on social media. In the Mahaan trailer, the Mahaan Vikram release date is announced. The film is going to release in Tamil along with Telugu and Kannada on Amazon OTT. Today the trailer is launched in three languages. Mahaan Trailer begins with Vikram teaching to school students and they are interrupting his class in the next scene, he is being portrayed as a husband who got scolded by his wife that his salary has been reduced by Rs 50.

Coming to the story Vikram played the role of Gandhi Mahaan. Gandhi’s Mahaan family fights for the complete banning of Alcohol. His Grandfather lost his life in this process. In childhood, Gandhi Mahaan promises his father that he follows the ideas and ideologies of his grandfather but when he grows up he changed completely. In fact, he becomes a liquor Syndicate. Why had he become like that? What will his son do when his father changed like that? You will get answers to these questions by watching the movie.

Mahaan Tamil movie release date was announced by Amazon Prime. The film will be available in three languages Tamil, Telugu, and Kannada on Amazon Prime from February 10, 2022, onwards.