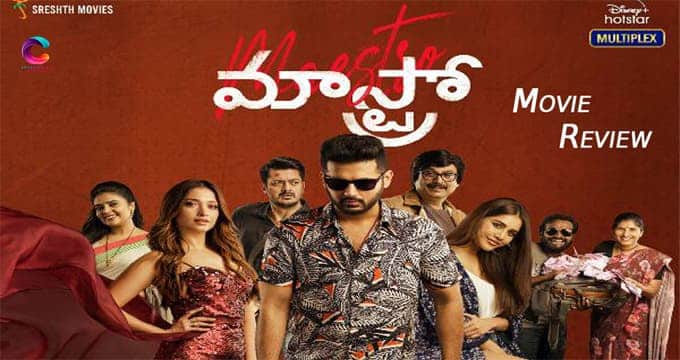 Maestro Movie Review and Rating: Another crazy movie to release on OTT due to covid. Maestro is the official remake of the Bollywood super hit movie ‘Andhadhun‘. The film, directed by young director Merlapaka Gandhi and starring Nithiin in the lead role.

Arun (Nithiin) is a piano player. To the world, he looks like a blind man. But in fact, he has eyes. He acts like he lost his eyesight in an accident and lives by performing concerts wherever he can, giving piano classes. In this scenario, Arun meets Sophie (Nabha Natesh). Sophie has a restaurant and Arun plays Piano in that restaurant.

One day his performance impress a customer called Mohan (Naresh). Mohan asks Arun to conduct a concert at their home on the occasion of his wedding anniversary with his second wife Simran. As mentioned, on the day of Mohan-Simran’s wedding, Arun went to their house and there were unforeseen consequences. The rest of the story is about how Arun’s life took a turn because of them.

It is not that easy to remake a movie that is already released in a particular language. ‘Maestro’ is also a movie in this category. It is based on the sensational hit thriller movie ‘Andhadhun’ in Hindi.

Let’s take a look at the Maestro movie. comparing with ‘Andhadhun’ aside, there is a general feeling that something is missing in this movie. Nowadays CCTV is common in every place but in a city like Goa that to in a posh apartment we don’t find any CCTV’s. which is totally logicless. Missing this logic in the crucial scene of the story changes the viewer’s feeling where it should be in the most suspenseful way in ‘Maestro‘. Also, the hero does not seem to have the right reason to act like a blind man.

Tamanna’s character, which is stunning, engages the audience by giving shocks upon shocks. Until the first half, however, the ‘maestro’ goes nowhere. Feels okay despite some flaws. But in the second half, the ‘maestro’ loosened up. Tamanna’s character did not use properly even though she had the opportunity to move emotionally in the scene where the hero was badly beaten. Here the hero fails to effectively show the pain to bring emotion to the audience.

There is no naturality in the content. However, it is OK to watch on an OTT platform without any expectations. Overall, The film Maestro movie is just a one-time watchable movie with family and Friends

In an overview, Tamanna’s glamor and acting are somehow plus points for the movie. Director may have used her character in a better way. Nithiin’s acting is good as usual. Logics are missing in the movie. Even the Music was not so satisfying. It is not up to mark that which audience expects from a thriller movie. DISCLAIMER: Please Do Not Judge The Movie Based On This Review And Watch Movie in HOTSTAR OTT.