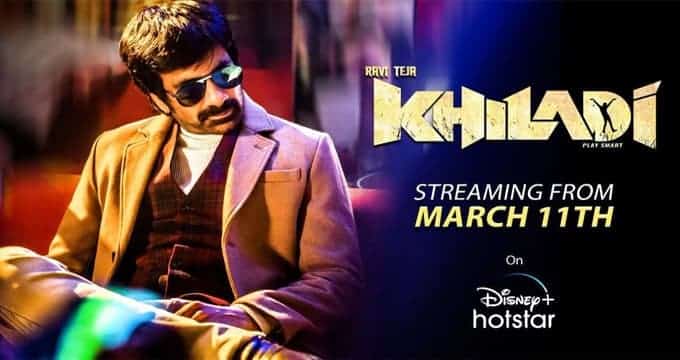 The film, released on February 11th with huge anticipation, failed to impress the theater audience. Khiladi Movie Story runs in regular commercial format due to that Movie Lovers are not satisfied with this movie. Coming to an overview of Khiladi Movie Ravi Teja Energetic Performance Heroines’ Glamor Show Action Sequence is impressive.

Leading OTT company Disney Plus Hotstar has acquired the Khiladi OTT and digital streaming rights for a solid price. Khiladi Movie Started a dull Openings within a week of landing in theaters. Because of this reason, The Khiladi Telugu Movie is all set to release on OTT within 28 days of its Theatrical release. Hotstar officially announced Khiladi Movie OTT streaming from March 11th onwards.

Khiladi Movie has not Success in theatres. We have to see whether it will be a hit in OTT or not…