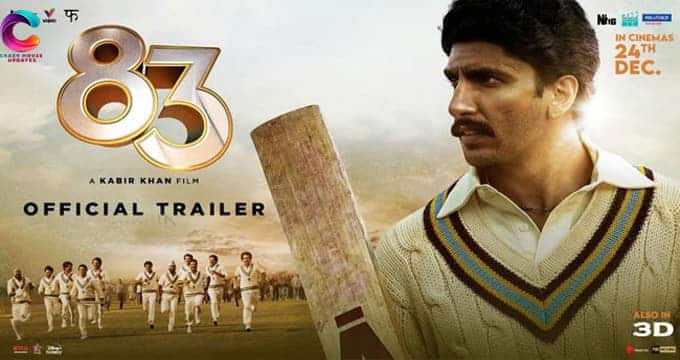 83 film completed its shooting a long ago but, due to covid situations, movie release has been postponed. Finally, 83 film is all set to stream on theatres. As a part of movie promotion, the makers recently released Kapil Dev 83 movie official trailer. It is coming to the audience on December 24th during Christmas.

As it was a pan India movie 83 Telugu trailer is also launched. Not only in Telugu 83 movie is also released in other languages like Tamil, Hindi, Kannada, and Malayalam. 83 Telugu trailer also received a good response from the Telugu audience.

The film will also be released in a 3D version. In this context, a 3-minute 49 seconds Hindi trailer is also launched. On this occasion hero Ranveer Sing tweeted “It’s a wonderful real-life story of a successful person. Here is the Hindi version of the trailer for you”. The trailer showed so many emotions. The most amazing part of the trailer is the emotional journey of returning home with the World Cup after winning over the West Indies.