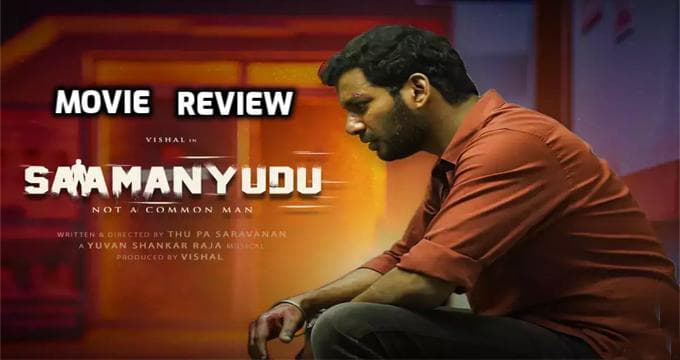 SAAMANYUDU MOVIE REVIEW: In the year 2022 Vishal is gearing up with many movies. Saamanyudu was one among them. The film aired in theatres a couple of days back. Here in this article lets us know about the Saamanyudu movie review.

STORY: Before going into the Saamanyudu movie review let us know a bit about the story without any spoilers. The film is much like a Cat and mouse game. Porus (Vishal) hails from a middle-class family. His wish is to join a Police department and serve the people. His father is also from the Police department but, he blindly follows the orders of his superiors in addition to this he always fears every small thing.

Porus is not like that he wants to become a powerful police officer. One day an unfortunate incident happens with his sister. What is that incident? How Porus chases the culprit plots the story. With this story outline let us move into the Saamanyudu movie review by talking about plus and minus points.

TECHNICAL ASPECTS: Coming to technicalities of the film director Thu Pa Saravanan failed in narrating the story. His slow narration takes away the interest in the film. The screenplay is good but in the first half, some unwanted scenes spoil the mode. The movie starts on a slow note. Fighting sequences were elevated by Yuvan Shankar Raja. Editing work by N.B. Srikanth could have been done in a better way.

CONCLUSION: The last word about the Saamanyudu movie review is, it’s a one-time watchable film. The audience will get to see some good action sequences, but the slow narration tests your patience it gives the feel like can we skip to the good part. You will entertain if you watch the film with zero expectations.