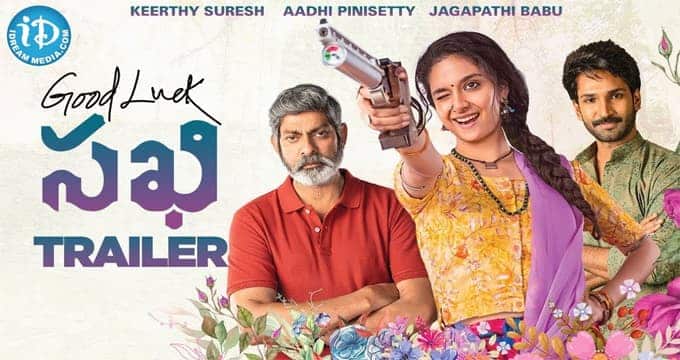 GOOD LUCK SAKHI TRAILER IS OUT: National award winner Keerthi Suresh is well known for female-centric films in the south industry. After Mahanati she is choosing different kinds of roles. Now Keerthi Suresh came up with her new film Good Luck Sakhi. It is a sports backdrop film.

Keerthi Suresh played the title role ‘Sakhi’ in the film, Aadhi Pinisetty acted in the male lead role. Jagapathi Babu also played the role of the coach which is one of the key roles in the film. Good Luck Sakhi trailer is out recently and creating buzz everywhere on social media. Sakhi is a village girl and people in that village consider her an unlucky girl. Hero is the only person who trusts Sakhi and supports her. Now the story takes a turn when Jagapathi Babu meets Sakhi and trains her as a shooter. The rest of the plot is about how she becomes a national-level champion in the shooting.

Good Luck Sakhi trailer is on #1trending on YouTube within a few hours of its release. The film is going to air in theatres on January 28. The film was directed by Nagesh Kukunoor and produced by Sudheer Chandra padiri. Sreekar Prasad did the editing work. Music was composed by Devi Sri Prasad. Good luck Sakhi film was made in three languages Malayalam, Tamil along Telugu.

After watching the Good Luck Sakhi trailer the expectations about the films were raised. We have to wait till January 28th to enjoy a movie on Big screens.