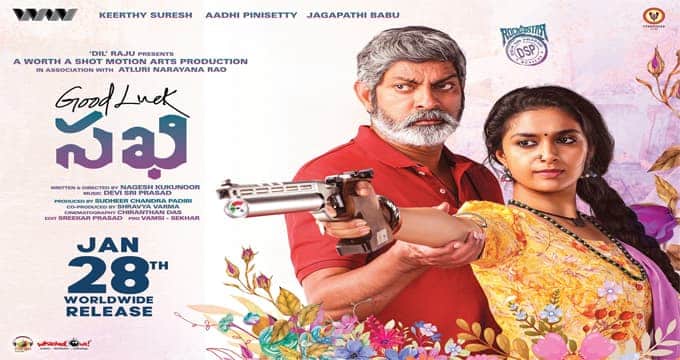 GOOD LUCK SAKHI REVIEW:  Good luck Sakhi movie release date was postponed previously and finally the film aired in theatres today. The film was directed by National award-winning- director Nagesh Kuknoor. It is a female-centric movie starring Keerthi Suresh in the lead role. Nowadays she become a brand for female-centric roles. This time she has chosen a sports drama zoner film. Did Sakhi impress the audience? To know the answer to this question let us go into Good Luck Sakhi Review.

STORY: Before going into the Good Luck Sakhi review let us know a bit about the story without any spoilers. Sakhi (Keerthi Suresh) is a village girl and the people in that Village consider her as an unlucky girl, she doesn’t give a dam to these words. Goli Raju (Aadi Pinisetty) lives in the same village and he is the childhood friend of Sakhi. Goli Raju always supports Sakhi. The story takes a turn when Coach Jagapathi Babu enters the village and starts giving Shooting training to Sakhi.

Will Sakhi be able to win the Shooting championship? What are the problems she faced during the process of taking shooting training? You will get answers to all these questions by watching the Good Luck Sakhi full movie on the big screen. With these details let us move into the Good Luck Sakhi review- in-depth by talking about plus and minus points.

TECHNICAL ASPECTS: Coming to technicalities the film failed completely in technical aspects. Editing work can be done in a much better way. Cinematography Chirantan Das is good but due to a bad screenplay, the movie failed in impressing the audience. Many dialogs are inaudible it completely ruined the interest in the film. The film has a lot more scope to elevate sports drama and sentiment, but the director completely failed in using these elements. The only plus point for the film is Keerthi Suresh acting and DSP music. Comedy is somehow good.