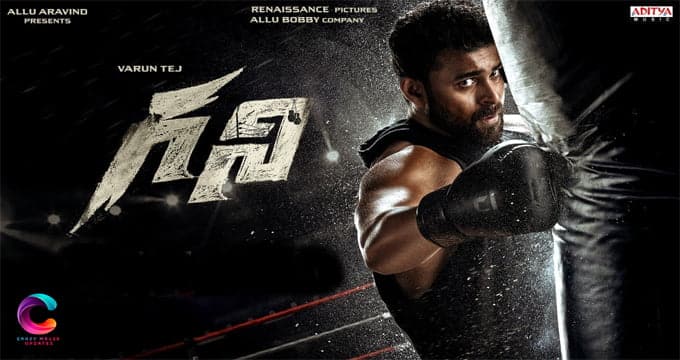 Glimpse of Ghani: Mega prince Varun Tej is ready with his new film. Varun Tej’s latest movie ‘Ghani’ is a sports drama. This film is based on ‘Boxing’. Ghani film was directed by the Debut director Kiran Korrapati. The makers have released the first Glimpse of Ghani the much-awaited movie today.

This 39-second video is released titled Ghani’s first punch. This video shows Varun Tej’s power pack punch. We can see Varun Tej in a boxing ring Knocking down his opponent with his punch. The transformation of the Mega hero into a professional boxer in the film is impressive. For this film Varun Tej was trained under the former England boxer Tony Jeffries. The glimpse of Ghani indicates the range of action sequences that are going to be in this movie.

The background score for the first punch was composed by music director Thaman. The visuals provided by George C. Williams were the main attraction for the film. On this occasion, the makers have announced that the movie ‘Ghani‘ will be released on December 3rd. This film has already completed its shooting and currently, postproduction work is in process. The major part of the shooting was done in Hyderabad and some part in Visakhapatnam.

Presented by Allu Arvind, the film is being jointly produced by Allu Bobby and Sidhu Mudda under the banner of Renaissance Pictures which is Allu Bobby’s production house. Bollywood beauty Saiee Manjrekar plays the heroine opposite Varun. Upendra -, Sunil Shetty, Jagapathibabu, Naveen Chandra are playing other important roles in the film.

Hollywood stunt master Larnell Stowell and Dilip Subbarayan designed the action scenes in the film. Ravinder is working as Art Director. Editing work was done by Marthand K Venkatesh. Abburi Ravi is the dialogue writer for the film. After the success of ‘F2’ and ‘Gaddala Konda Ganesh’, Varu Tej is waiting for another blockbuster film.