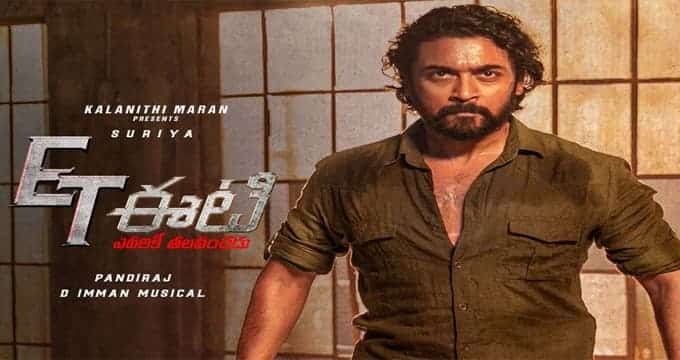 ET TELUGU MOVIE REVIEW: For the past few years’ hero Suriya was waiting for the biggest hit. His hunger for hits was full filled with the film “Akasam Nee Haddura”. After that Jai Bhim released in Amazon Prime OTT is also given the biggest hit in his career. Anyways due to pandemics, these two films were released on OTT platforms. Now with the announcement of the ET movie release date fans were excited to watch their favorite hero on the big screen. Without any delay let us movie into ET Telugu movie review.

Before going into the Suriya ET Telugu movie review let us know a bit about the story without any spoilers. The film starts in the village backdrop. Our hero Krishna Mohan (Suriya) lives happily with his family in the village. He is a lawyer by profession. One day he falls in love with Adria (Priyanka Arul Mohan). The plot takes a turn when Kamesh enters the story. Who is Kamesh? What made Krishna Mohan face-off with Kamesh? All these things plot the rest of the story.

TECHNICAL ASPECTS: Talking about technicalities in ET movie review, firstly we need to talk about director Pandiraj, he previously directed National award-winning films but this time he failed completely to show his mark on ( ET ) Etharkkum Thunindhavan film. Production values in the film are just Okay. Editing work could have been done in a much better way. Basic drama in the first half is missing which made me unconnected with the second half. The camera work is impressive and BGM by Imman is also good.

CONCLUSION: Closing remarks on ET movie review is it’s an average film. There are no such interesting elements in Evariki Thalavanchadu movies. You can watch ET full movie by lowering your expectations