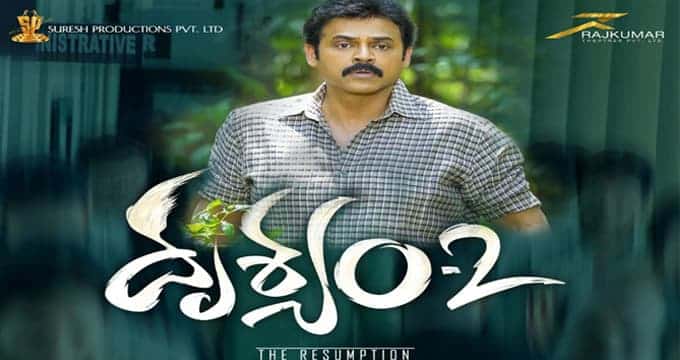 Drushyam 2 is the sequel for the super hit film Drushyam. And it was the official remake of the Malayalam movie Drishyam 2. Amazon prime received rights for streaming this film. Recently, Amazon released a trailer for the Drushyam 2 film.

This film is a continuation of Drushyam which was released in the year 2014. Drushyam 2 starring Venkatesh Daggubati, Meena and Nadiya. This film is the story of a middle-class family. Rambabu is a cable operator who lives happily with his wife Jyothi and two daughters in a small village near Vijayanagaram. Varun is the one and only son of Inspector General of Police Geetha (Nadiya).

Drushyam 2 movie OTT release date is fixed on November 25th. Drushyam 2 is the scene that is set after 6 years of this incident. Rambabu starts a new life. He was planning to produce a movie with his own money. At that time Varun case will be re-opened. Now the story is about to how extent will Rambabu go to save his family this time. We all know that Drushyam is a sensational hit now the audience is excited to watch its sequel which is going to release on the 25th of November on Amazon prime.

Many of the Venkatesh Fans and Family audience are eagerly waiting for the Drushyam 2 movie OTT release date. This film was directed by Jeethu Joseph and was produced by Daggubati Suresh, Rajkumar, and Antony Perumbavoor under Suresh Productions. Tanikella Bharani, Nadiya, Naresh, Sampath Raj, Jayakumar, and Esther Anil are playing other important roles in this film. Satheesh Kurup did Cinematography work. Marthand K Venkatesh taken care of editing part. Anup Rubens provided music for the film. We have to wait till November 25th to watch this thrilling drama.