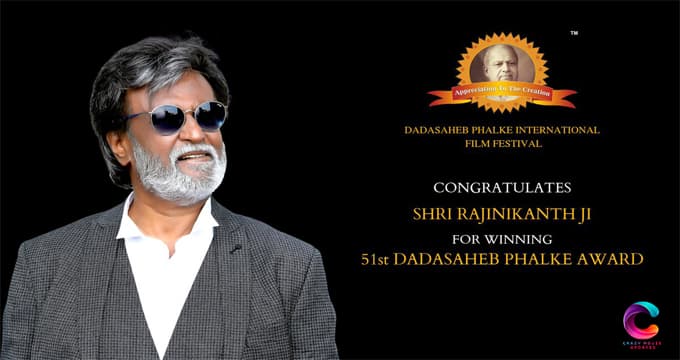 Dadasaheb Phalke Award 2021: Rajinikanth is not that handsome and his acting skills also didn’t show at first. Body-color is also completely black. The eyes are very small. However, he showed his power to the Indian Film industry. He has been an unstoppable actor for four decades and continues in the South industry. He has taken his rejections and failures as steppingstones. Now he is Super Star of Indian Cinema. Rajini’s records are unbreakable. His fame spread to the continents. Today he is the winner of the Dadasaheb Phalke Award 2021 for his tremendous services to Indian Cinema. He really a deserving person of that award.

Rajini made her debut film with Apoorva Ragangal directed by K Balachander in the year 1975. Versatile actor Kamal Hasan also acted in this film. After this Film Rajinikanth climbed many stairs correcting himself from film to film. Today he himself has become a university for acting. Rajini is not a great dancer, he even hasn’t said heavy dialog. But his fans loved him for his style. The way he spokes even his walking style, his dressing becomes sensational.

A single-line dialog said by Rajini is a sensation. Fans used to imitate him, he received so many applauses for his dialogs. In acting, Rajini never made a mistake. Never been controversial in his entire career. He has a lot of respect for producers, co-artists, and technicians. Balachander, who gave him his first chance, will always be considered a teacher. He never forgot his roots. Rajini, who always knows where he came from and is always remembered, is really Dada. Rajini is like a Yogi who always tries to spread positivity in people’s minds.

Future generations have a lot to know about Rajinikanth. He previously was Padma Bushan and Padma Vibushan from the Indian Government. Now he was horned with the most prestigious award in Indian Cinema that is Dadasaheb Phalke Award 2021. Rajini is a Superstar both on-screen and off-screen. That is why he is an inspiration to all generations.