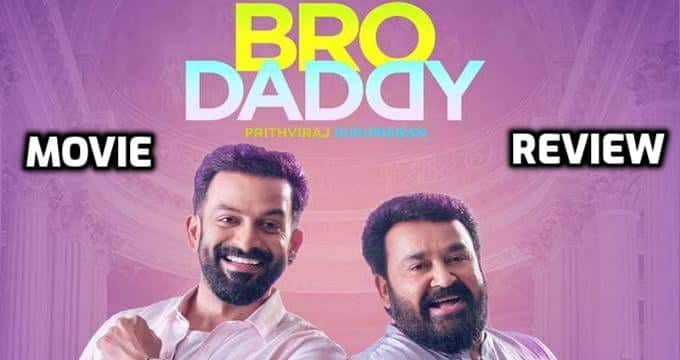 STORY: Before going into Bro Daddy review let us know a bit about the story. Jhon Kattadi (Mohan Lal) and Annamma (Meena Sagar) are happy couples even after their 25 years of marriage life. Eesho (Prithviraj Sukumaran) is one and only son of Jhon and Annamma. He works in Bangalore and lives there along with Anna (Kalyani Priyadarshan), she is the daughter of Jhon’s friend Lalu Alex. Anna and Eesho are in a live-in relationship. The story takes a turn when Anna becomes pregnant.

The rest of the plot makes the story. How do they deal with their parents? How do they find solutions to their problem? You will get answers to all these questions by watching the film. Bro Daddy is available on Hot Star you can go and enjoy the full movie there. without any delay let us move into Bro daddy Movie Review

TECHNICAL ASPECTS: This is the second film for Prithviraj Sukumaran as a director with Mohan Lal. While making a film with great actors like Mohan Lal, Prithviraj could have been done better. It would have been better if he works more on screenplay and story.  The film felt boring in many situations. Production values by Antony Perumbavoor are good. Editing work is clumsy it could have been done in a better way.

Conclusion: Colluding note on Bro Daddy review is, on a whole, it is Okay to watch the film. If you are a comedy-loving person then you will surely enjoy the film a lot. The emotions in the film also carried well. On the whole Bro, Daddy Malayalam film is suggestible to watch.