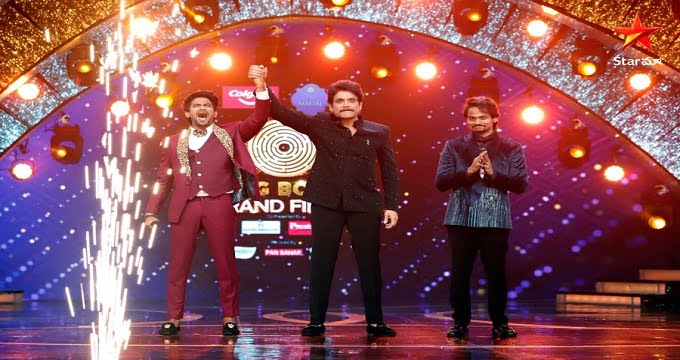 Bigg Boss 5 winner: SUNNY is Bigg Boss season 5 winner. VJ Sunny and Shanmukh Jaswanth are the top two finalists of Bigg Boss season 5 among then Sunny stood as winner of BB5 with 55, 465 votes and the runner up for this season Shanmukh Jaswanth got 28, 580 votes. Bigg Boss winner Sunny received a Prize of 50 Lakhs cash and 300 Squares yards of land along with prestigious Bigg Boss 5 trophy. Sunny and his parents become emotional at winning moment. When Nagarjuna sir announced Sunny as winner, Sunny’s excitement and his happiness reached sky he and his parents become a bit emotional.

Sunny, Shanmukh Jaswanth, Sree Rama Chandra, Manas, and Siri are the top five finalists for Bigg Boss 5. Among them Siri got evicted first and then Manas followed by Sree Rama Chandra. Nagarjuna went into Bigg Boss house and brought Sunny and Shannu on to the stage. After a lot of suspense Bigg Boss season 5 winner name was announced as Sunny by Nagarjuna.

Grand finally episode started with dance performances of Nagarjuna and previously eliminated contestents of this season. Heroin Shreya did a special dance performance. Later team Brahmastra came on to the stage along with SS Rajamouli. Brahmastra was directed by Ayan Mukerji and starring Ranbir Kapoor and Alia Bhatt in lead roles. The team Brahmastra played a fun game with contestants. Alia Bhatt said Bala Krishna dialog it was so cute. After that Siri got evicted from the house.

Later as a part of Shyam Sing Roy movie promotion hero Nani entered Bigg Boss house along with Sai Pallavi and Krithi Shetty with a suite case of 10 lakhs prize amount. But no one taken this amount. After that Manas got evicted from the house. Upnext Naga Chaitanya enteret house with a golden briefcase of 20 Lakhs as a part of Bangarraju film promotion. This time also none of the housemate taken this prize amount. Later Sree Rama Chandra got evicted form the house.

After the elimination of Sree Rama Chandra, Sunny and Shannu were the top two finalists in the house. Then Jathi Ratnalu fame Faria Abdullah entered the Bigg Boss house and created Buzz in the house. After some fun Nag sir announced Bigg Boss 5 winner as Sunny