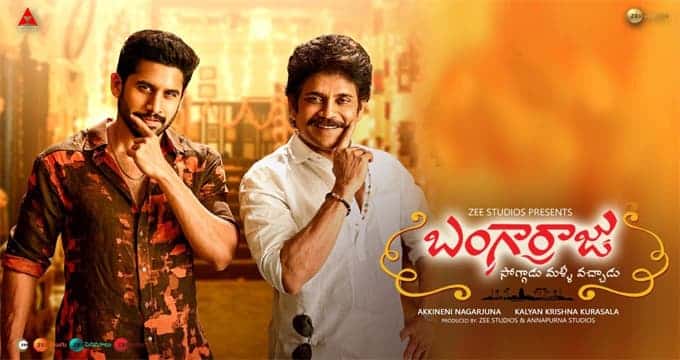 Bangarraju starring Naga Chaitanya and Nagarjuna is all set for its release. The film was directed by Kalyan Krishna. In Bangararraju Ramya Krishna is paring with Nagarjuna and Krithi Shetty with Naga Chaitanya as heroines. This film is a sequel to Blockbuster hit movie Soggade Chinni Nayana.

The shooting of Bangararraju is completed and post-production works are going now. The film will be aired in theatres this month as a sentiment, Bangarraju is in the Sankranti race. As a part of movie promotion, the Bangarraju teaser was released by its makers. Previously released first look teaser and dialogs already created buzz on the internet. The songs from this film also increased hype about the film among fans and the audience. The recently released Babgarraju teaser is like an eye fest for Akkineni fans.

The film team released the Bangarraju teaser today as a New Year gift. Nagarjuna and Naga Chaitanya look stunning in the Bangararraju teaser. The 1 minute 34 seconds teaser has everything that fans expect it has entertainment, action, suspense, and thrill. This is enough to tell that the film is going to be a blockbuster hit. The climax scene of the Bangarraju teaser where Nagarjuna and Naga Chaitanya walk together is just lit. This single frame is enough to bring the audience to theatres.

As pan India level films like RRR release are being postponed due to covid new variant fans are hoping Bangarraju’s release without any hurdles.

For more movie-related news stay tuned with CRAZY MOVIE UPDATES which is a genuine source of information for movie updates.

RRR Release Postponed Again Due To rising Of Omicron Cases