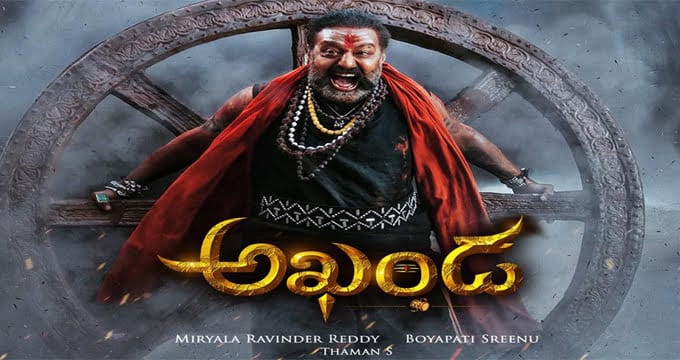 Akhanda Box Office Collection 100 Crores record: Tollywood is always unique when compared to other film industries. There are stars and Superstars only in the Tollywood industry. Not only that even in the age of the Sixties also some actors are acting as heroes and succeed in maintaining their image. However, there is tough competition between Chiranjeevi, Balakrishna, Nagarjuna, and Venkatesh in Tollywood in the eighties and nineties. They had a healthy competition between them and gets huge success beyond one another.

The competition becomes more interesting with the advent of the younger generation after 2000. Somehow the craze among the audience is decreased with the entry of the younger generation. At that time also they give tough competition and success in getting hits. Especially mass heroes like Chiranjeevi and Bala Krishna are coming with new movies to date.

Mega Star Chiranjeevi movie Khaidi No.150 reached a hundred-crore club. It was the first film done by Chiranjeevi after his re-entry into movies. This was an unexpected success for Chiranjeevi. Moving on to Balayya his film Gautamiputra Satakarni reached the fifty-crore club for the first time. Another movie with a target of 100 crores was made based on Balayya’s father NTR life story. The film highly disappointed him. After that, there are so many doubts raised as to whether Balayya would be able to reach 100 crore club or not.

Now it’s time for Venkatesh and Nagarjuna. With Soggade Chinna Nayana Movie Nagarjuna showed his power he reached 50 crores club. There are good expectations on Bangaraju movie too. Moving on to Venkatesh his multi-starer film F2 collected 80 crores at Box Office. However, the entire credit will not be credited to Venky’s account. Now Venkatesh is doing the prestigious project. His 75th film is one among them. Hopefully, Venky achieves that dream of 100 crore club. Finally, if Tollywood seniors join the 400 crores club then it will surely be a new record for Tollywood.