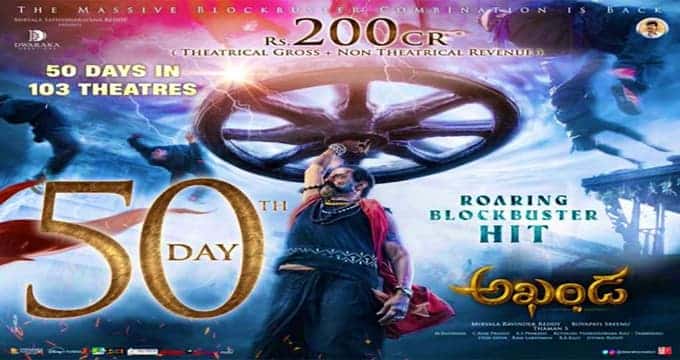 Akhanda 50 Days: When the talk came that Boyapati Srinu was making a movie with Balakrishna as the protagonist, everyone’s interest increased. Because ‘Simha‘ and ‘Legend,’ who has previously appeared in their combination, have created good records at the box office. Now, akhanda is also entered in that list.

Today Akhanda Movie Completes 50 days of its theatrical run in 103 centers. In the present situation, any Movie is challenging to stand in theaters for days a week, such an honor to complete 50 days of this Akhanda movie.

The film was released on 2nd December worldwide. From the first show onwards, the movie got a massive response from the audience, and akhanda is one of the biggest hits in Nandamuri Balakrishna’s career. Balayya has also joined the hundred-crore club with Akhanda Cinema.

Still, Today After the completion of Akhanda 50 days run in theaters, Many Movie theaters show Housefull boards. Here in Below, you can see the Akhanda 50 Days in 103 centers list