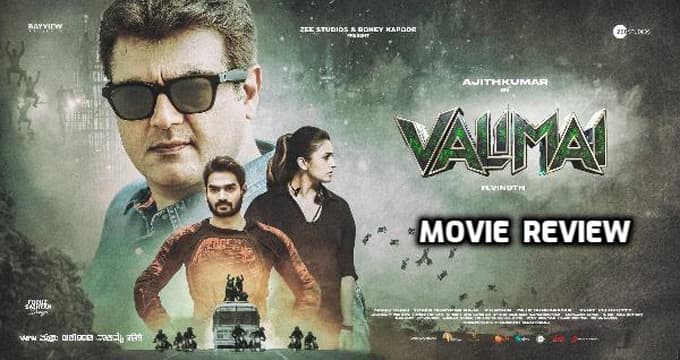 VALIMAI REVIEW: Fans are very much excited when the Valimai movie release date is announced. It is all because the previously released Ajith Valimai trailer and Valimai first look poster create hype for the film among the audience. Let us see whether the film reached audience expectations or not in Ajith Kumar Valimai review.

STORY: Before going into the Valimai review let us know a bit about the story without any spoilers. A dangerous bike gang creates a disturbance in the Vizag city by doing illegal activities like drugs business. This notorious gang was led by Saithan (Karthikeyan). To make a check for this gang police department head appoints a powerful police officer Arjun (Ajith). The story takes a turn when Arjun’s brother gets involved in a drug crime. How does Arjun save his brother? How did he arrest the criminals? All these things plot the story. With this let us dive into the Valimai review. 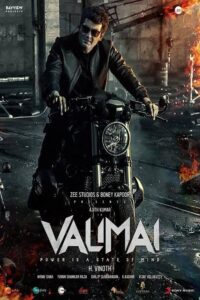 TECHNICAL ASPECTS: Coming to technicalities production values in the film are too good. Camera work is on top-notch epically chasing scenes captured well. The editing part could have been done better. Talking about writer and Director of Valimai movie, H. Vinoth successes in showing action sequences but failed totally in scriptwriting.

In fact, after watching Ajith Kumar Valimi First look poster and trailer audience expected a lot from the film. Except for action scenes, there is nothing much to watch in the film. It disappointed me a lot. Due to the dull screenplay, the second half felt a bit boring. Even Karthikeyan’s character hasn’t been used properly.

CONCLUSION: Closing remarks on the Valimai review is if you want to watch an action sequence then book your ticks for the movie. As an Ajith fan, I got a bit disappointed with the story. But Ajith’s looks, acting, and performance are on the top level. You will enjoy the film if you low your expectations before watching the film.