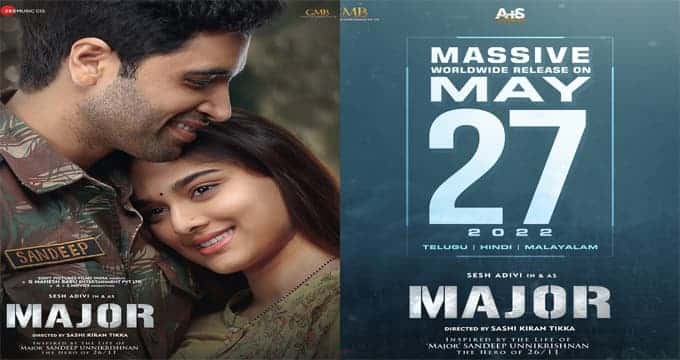 ADIVI SESH MAJOR MOVIE RELEASE DATE IS ANNOUNCED: Adivi Sesh is one of the popular names in the Tollywood industry. He has given entry into the film industry without any background and become popular within a short span of time. He always came up with unique and interesting films. Adivi Sesh created a brand for himself. This time is coming with a new film called ‘Major’.

Adivi Sesh Major movie release date is out now. The film is going to air in theatres on February 11, 2022. The film was based on true events. The film is based on the life story of Major Sandeep Unnikrishnan, who fought and died a hero in the 2008 Mumbai terror attacks. The film was directed by Goodachari fame Shashikiran Thikka.

The film will be released in Telugu along with Hindi and Malayalam language on February 11, 2022. Adivi Sesh Major movie release date worldwide will be on May 27. In the month of February few other movies also announced their release date.