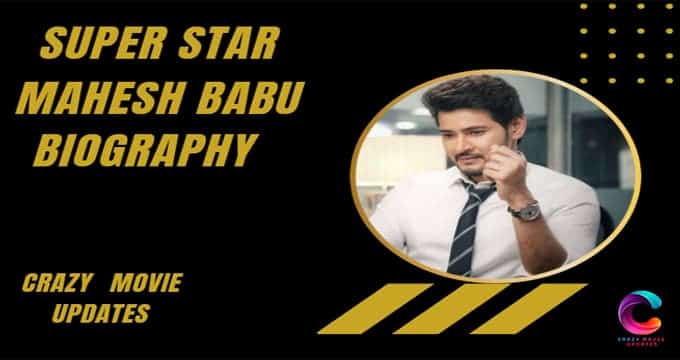 Actor Mahesh Babu Biography: Superstar Mahesh Babu is not just a name it’s a brand in the Tollywood industry. He has a huge fan base, especially in the female audience. He has craze at the Pan India level. Mahesh babu is an actor, producer, influencer, and philanthropist. He acted in more than 25 films. His life is inspirational to many. In this article let us draw a few aspects of Mahesh Babu’s life.

Ghattamaneni Mahesh Babu was born on the 9th of August 1975 in Madras, Tamil Nadu. He was the younger son of former actor Krishna and Indira Devi. Mahesh Babu did his bachelor’s degree in commerce from Loyola College Chennai. He has two siblings, one brother, and one sister. He married actor Namrata Shirodkar in the year 2005. After marriage, Namrata stopped acting in movies. They have two children Gowtham and Sitara. Actor Mahesh Babu was introduced to the Telugu film industry as a child artist with the movie ‘Needa’ directed by Dasari Narayana Rao. Later he acted with his father in ‘Poratam’ film. After a few years gap, he did his debut film with Raja Kumarudu movie directed by K. Raghavendra Rao in the year 1999. This film gave him the title ‘Prince’.

In the following, he acted in the films Yuvaraju and Vamsi. These films are a disaster at Box office. In the following year, The Film Actor Mahesh Babu acted in Murari directed by Krishna Vamsi, He played the title role in this film. This film got big success at Box Office. ‘Okkadu’ movie directed by Gunasekhar co-starring Bhumika was released in the year 2003, this film recorded the highest-grossing Telugu film for that year.

After receiving a huge success with the okkadu movie Mahesh Babu never looked back. He acted in so many movies among them some are average hits, some are super hit, and some Blockbusters. Among those Athadu, Pokiri, Dookudu, Srimanthudu, Businessman, Bharat Ane Nenu, Sarileru Neekevvaru are blockbusters. Currently, his movie ‘Sarkaaru vaari Paata’ co-starring Keerthi Suresh is on set. It was directed by Parasuram. This film is expected to be released next year. Mahesh Babu is the first Tollywood actor who has a total of six films in the 100cr club according to IMBD. Those are Sarileru Neekevvaru, Bharath ane nenu, Maharshi, Srimanthudu, Spyder, Dookudu. Not only this he received so many awards like SIIMA, IIFA Utsavam, Zee Cinema awards, and many more.

Mahesh Babu as a Brand Ambassador

Actor Mahesh Babu is a very kindhearted person. He uses his 30% of the income for social activities. Mahesh babu adopted a village in Mahbubnagar district. At the time of Hudhud Cyclone, he donated 2.5million for the CM relief fund. Every year he donates money for the treatment of poor children. As Mahesh Babu is an introvert, he does charity works from behind the screen.