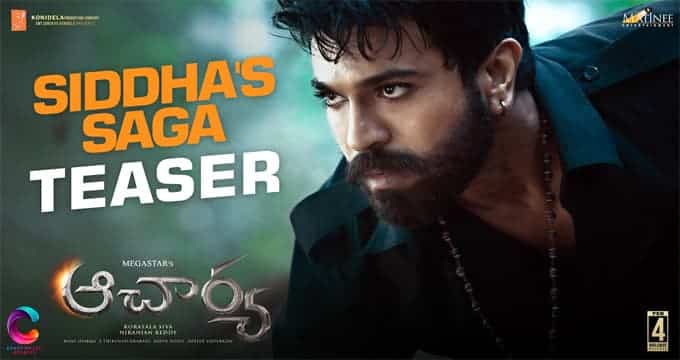 Recently Acharya movie teaser was launched. Fans are eagerly waiting for Megastar Chiranjeevi Acharya movie which is directed by koratala Shiva. Ram Charen is going to appear in a pivotal role in this film. The director, who initially wrote Siddha’s role as a guest role but when Ram Charen said okay for Siddha’s role Director koratala Shiva enhanced the role. With that Acharya become a bit multi-starrer movie.

Charan is going to appear as Siddha Saga in Acharya. With Acharya movie teaser on Siddha Saga, we can understand the aggressiveness and attitude of the character. The climax shoot of this teaser is undoubtedly a fantastic one.

The climax shoot of this teaser is undoubtedly a fantastic one. The first short of the camera is focused on a Tiger cub drinking water and it is being under the protection of its father Tiger. The later camera will be focused on the other side of the lake where Ram Charen is drinking water and Chiranjeevi is in his back. This single short from the Acharya movie teaser is enough to tell how the movie is going to be.

Fans are discussing on social media that Siddha’s character visuals are no less than Alluri’s role in the RRR movie. According to the recent Acharya movie teaser, we can understand that along with Chiru, Ram Charan is also going to be seen as Acharya in the film. The teaser duration is about 2 minutes.

In Acharya movie teaser on Siddha Saga makers show Ram Charan romance with Pooja Hegde, a fight with Sonu Sood and Ram Charen playing with children. By watching the teaser fans are confident that the Acharya movie is going to be the biggest blockbuster.

Golden Chance for Hyderabadis to act in Prabhas 25th movie ..!