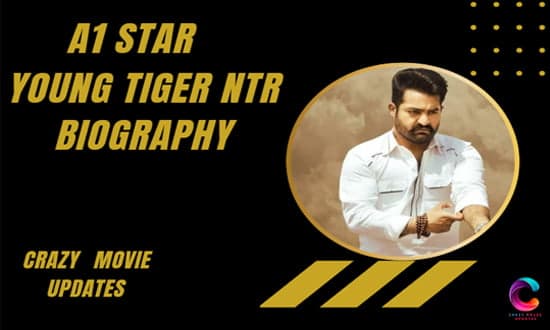 Nandamuri Taraka Rama Rao is well known as Jr NTR. Fans call him Tarak or Young Tiger. Tarak is one of the dynamic actors in the Telugu film industry. He is a multitalented hero. Tarak is both dancer and singer. Even though he came from a filmy background family, he had created his own fan base with his hard work and talent.  He is one of the highly paid heroes of the South. In this article let us talk about A1 Star Young Tiger Jr NTR Biography and his lifestyle in short.

Nandamuri Taraka Rama Rao was born on 20 May 1983 to Nandamuri Harikrishna and Shalini. Harikrishna is the son of a former Tollywood superstar and Ex-Chief Minister of Joint Andhra Pradesh Nandamuri Taraka Rama Rao. Jr. NTR is the grandson of N.T. Rama Rao. His father Harikrishna is also a former Telugu hero and politician. Tarak married Lakshmi Pranatha in the year 2011. They were blessed with two sons named Abhay Ram and Bhargav Ram. Tarak is a trained Kuchipudi dancer. He is the nephew of actor Bala Krishna and Ex-Chief Minister of Andhra Pradesh N. Chandrababu Naidu.

In the year 2001, he debuts as a hero with the film Ninnu Choodalani. He got success with the film Student No.1 which was released in the same year. He always received appreciation for his acting and dancing. His success journey continued with the films Aadi, Simhadri, Adhurs, Brindavanam, Nannaku Prematho, etc.

Young Tiger NTR tasted his first success with the movie Student No.1. In the year 2002, he received another blockbuster hit with the film Aadi. Later His success journey continued with the films Simhadri, Yamadonga, Janatha garage, and still his success journey continuing. He almost acted in more than 25 films. His current movie RRR is on sets. It’s a pan India level movie directed by S. S. Rajamouli. In this film NTR shares screen with another star hero Ram Charan Tej. It is expected to be released next year. Not only South even B- Town people are very much excited about this film.

In the year 2017 NTR hosted Bigg Boss Telugu reality show season 1 broadcast by Star Maa. NTR made this show a huge success, Star Maa is at no.1 position in TRP rating at that time. Currently, he is hosting Evaru Meelo Koteeswarulu which is broadcast by Sun network. He is successfully running this show. He also gave a guest appearance in the Telugu dance reality show Dhee broadcasted by ETV.

He donated 20 Lakhs to the Chief Minister relief fund in the year 2009 for floods victims. During his movie audio function one of his fans died, Tarak donated 5 lack rupees to his family.

NTR is currently busy with his new project RRR. All the best to Young Tiger for his future projects.